Thursday 28th April saw a historic strike at John Fisher school in Sutton, South London. It was the first time that a union group has ever taken strike action to defend LGBT+ inclusive education.

No strike action took place during the 15 year duration of Section 28, which ‘prohibited the promotion of homosexuality’ and none has taken place since its abolition in 2003.

This makes this strike an important landmark for our union in standing up against homophobia, biphobia and transphobia in our schools.

Last Thursday it was discussed on BBC London News and on Radio 4. The strike received massive support. But the success of this strike is very important.

Its outcome is clearly a test point for the future of LGBT+ inclusive education in schools.

The NEU members at John Fisher are taking a brave stand for equality and against prejudice and we should support them unconditionally.

However, the Archdiocese of Southwark are now trying to change the terms of the argument. Now they are saying that having an LGBT+ author and discussion of gay experiences is an attack on the Catholic religion.

They quote sections from the books of the invited author, Simon James Green, in order to frighten parents and create a backlash against those standing up for equality.

The books are humorous, ironic stories about teenage love including gay relationships. They are not the devil’s work. This is so Section 28.

This is a classic reversal. It is the Archdiocese that has the power, sacks the school governors, bullies the staff, bans writers and marginalises and erases the existence of a minority group.

It is vital that we get behind the upcoming 5 days of action that John Fisher NEU members are conducting on Tuesday4th/Wednesday 5th May and 10/11/12 May.

Rush messages of support and solidarity to: [email protected]

Around 50 staff at Coulsdon Sixth Form College in Croydon are to stoke again for two days this week, following one day on strike last week. The staff are members of the NEU (National Education Union) and are in dispute with College management over a refusal by the administration to honour nationally agreed pay awards.

Coulsdon Sixth Form College is now part of Croydon College but retains its identity as a setting at which terms and conditions of employees differ from those based at the Croydon College site. As such, salaries of the NEU members employed at Coulsdon are negotiated at national level by the NEU and other education unions.

Successive settlements agreed with employer representatives at a national level have not been recognised by Croydon College management causing anger and frustration amongst NEU members at Coulsdon.

They have drawn attention to feeling under valued and point to the retention and recruitment problems that poor salaries are responsible for. In addition NEU members claim that matters are made worse by the erosion of pay in real terms due to the higher cost of living caused by inflation.

Frustrated by the intransigence of the Croydon College authorities NEU members demanded a ballot for strike action in support of a salary increase. This resulted in a 90%+ vote for strike action

messages of support to [email protected]

NEU members at Chingford  Foundation school in Waltham Forest have ended their formal ballot before it closed after agreements were reached on 15 workload, pay and terms and conditions issues.

NEU members continued their strike action this week. 8 days of strike action over workload, pay and bullying have led to some significant concessions being made. There are issues that remain unresolved around pay and notification has been given 9 more days of action should talks this week not resolve matters.

Messages of solidarity and support to

Cleaners at Connaught school for girls continued their strike action for 3 days this week over TUPE transfer. TUPE transfers do not protect workers indefinitely and this has been recognised by the strikers and the NEU. The next days of strike action will take place on

Messages of solidarity and support to 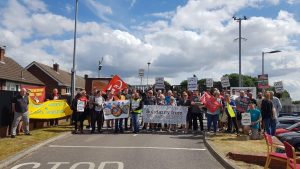 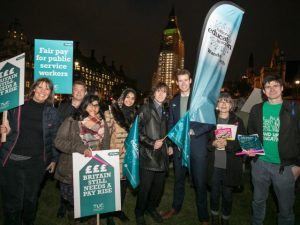 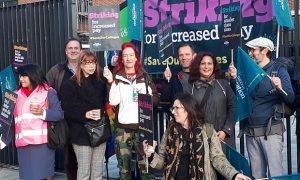